As perhaps already noticed, I write less of places I have visited. This is mainly on the one hand that I lack time, but on the other hand also that it is just getting hotter here with quite high humidity. Since it makes now no fun to walk longer distances over a long time.
For this time: I had the pleasure of getting to know the Japanese rainy season. This is actually an exaggeration.The rainy season is here in Shizuoka from about mid / end June to early July.
Exaggeration, because this year it mostly rained only at night, so I have hardly noticed it. Except on a day where it just rained. A small warning to the rain, it can happen that surface-active substance are in the rain. This is not always the case, but since the rainy season more frequently. How do I know this and why it is important? On the one hand, you can see that. The water on my jacket had a slight foam and in the water on the street you could also see weak foam. And on the other hand it is important because if you have the wrong good rain protection, it becomes totally ineffective. On the day it did not rain heavily, normal rain like in Germany. Nevertheless, my complete sailing rain jacket was totally through, which has not happened even with stronger rain in Germany. Unfortunately my backpack with paper and laptop also ….

In addition, I can understand why the Japanese prefer to wear umbrellas as a jacket. It is already very warm in the beginning summer and the rain does not cool down strongly. If you now wear a jacket, it becomes very unpleasant very quickly at an even higher humidity.
I found my t-shirt already too much, I am probably an ice-cold type … ..
The picture shows the channel about half full, but the rain had already a longer break time. So he must have been much fuller. Here again for comparison a photo from more blank times. 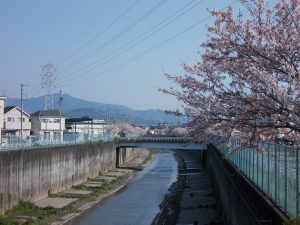 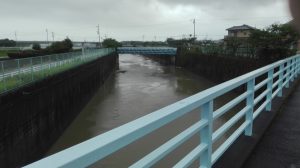 On July 4th of this year, we got a visit. The storm Nanmadol came by. This sounds harmless, but the storm has already developed a center and has caused 30 death sacrifices, floods and landslides in Japan. The Japanese army was also in action. Nevertheless, I hardly noticed the storm and could not see the center. The storm had already lost a lot of power until it arrived in Shizuoka, so that here only a strong storm with much rain arrived. Due to the storm warning, we were also allowed to leave the work earlier to safely arrive at home. This meant, however, to go rather punctually after the end of the core working time (17.30 clock). Since the first foothills and rain showers were expected only around 6 pm. Since I did not leave immediately, I had the pleasure of experiencing the first winds and chills. Still quite pleasant;) Unfortunately, I could not fly home, but the storm had at night a decent strength and the rain was at least impressive regarding the sound.