The road traffic is in principle just like in Germany, only that here links traffic prevails. This is actually a fist formula. The other is that the very narrow streets here, so that these (even some wider streets) have no walkway for pedestrians. Then you have to walk on the street. Against the actual traffic directed. This has already given me a few queasy situations or almost a “near-death experience”, when such a thick bus meet me once. So one can be a little bit queasy. And dodge is often not possible, there are often the house / grounds walls.
Sometimes there also just marked pedestrian paths.

Cycling is also such a thing. Again (to my knowledge) the same as in Germany, but ringing? No, it’s totally rude and therefore, it’s not done. The result is that sometimes you have the feeling of being rolled over by a bicycle from the rear, if one passes by (or you change your walking direction and then comes one). Anyone who now thinks of masses of bicycles is wrong. That is probably u.a. in China, but at least not in Shizuoka.

In addition, Zebra crossing or street transitions can simply end at a wall or directly into another street. Some traffic lights at large crossroads have in addition to the green light for pedestrians a sound, depending on the direction of the crossing. At least one of them sounds like imitating bird voices. 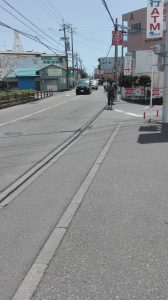 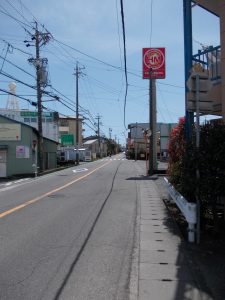